For the past two months I have been teaching in the sculpture department at Milwaukee Institute of Art & Design.  My class is based in the foundry with an emphasis in bronze and aluminum casting.   The course curriculum I’ve put together this semester is as conceptually focused as it it materially based- and because of that the students have been producing work that is mixed-media as well as performative, in tandem with their existing interests and bodies of work.

It might be surprising to imagine me running around with a crucible of molten metal and team of students, but I actually have a history with the stuff.  Bronze casting was my very favorite thing to do in my first incarnation as an undergraduate student.  I first started taking my degree seriously when pouring bronze, and even after I left school and moved to the Bay Area, all of the great ideas I would draw out (between waitressing and rock climbing excursions) would inevitably find their way back to bronze.

During that break in school I didn’t have access to a metal studio, so I adapted the mold making skills I’d picked up in the foundry to my environment (often times it was a shared apartment kitchen or balcony).  First I learned about alginate and plaster, then vinyls and rubbers.  Moving ahead several years, and most recently I’ve been slip-casting porcelain- yet another mold dependent process.  The ironic thing now is, sometimes the mold is my favorite part of the piece.  Yet another lesson in learning to love what you first resist.

All that said, it has been awhile since I have been in the foundry environment.  Its so much less macho than I remember.  The environment at MIAD is without bravado, there is way less risky behavior and lots of question asking.  The metal pours are yelling free.  Rather, as a class we choreograph the pour a few times in the class before the scheduled date and then once on the day of.  This creates an environment where the students call out to each other during the process.  Though I helped direct my class through a few moments in out last aluminum pour, I left strongly convinced they will in a short time be capable of doing it without me.

So this semester my class is working on issues of multiplicity, fixing and mending as well as the phantasmagoric in their projects.  Every project begins with a reading… yes, reading, which leads to lots of drawing and THEN we make stuff.  Mold-making skills are a must in the class, and so we’ve spent afternoons imagining the space around objects, visualizing draft while getting coated in plaster, alginate, caulking and now silicone. Like many things, thinking in invisible separable-part space that surrounds all objects does become easier (and even strangely addictive for some).

This job, the foundry and many of the metal techniques I have been teaching are all thanks to Jill Sebastian.  Jill, while also tackling numerous public art projects here and beyond, is the head of the Sculpture department at MIAD.  She offered me the opportunity to teach earlier this summer, which I happily accepted.  Since starting the job I’ve had to pinch myself several times for being so fortunate.  I survived grad school and now have a great mentor and 10 bright students.  I couldn’t be happier.

With limited time in the studio I have turned to altering a collection of commemorative plates I’ve amassed over the past two years.  I began collecting plates during a period when I was looking to develop a rapid way to move through ideas.  As many of the ways I make art are process laden and time consuming, the plates have provided a great place where I can loosen up and try things out.

My plate altering process require shelf paper, sharp exacto blades and a sandblaster.  Depending on the image I either remove existing details from the found images or I’ll erase silhouettes of objects that were never there.

Here are some recent pieces: 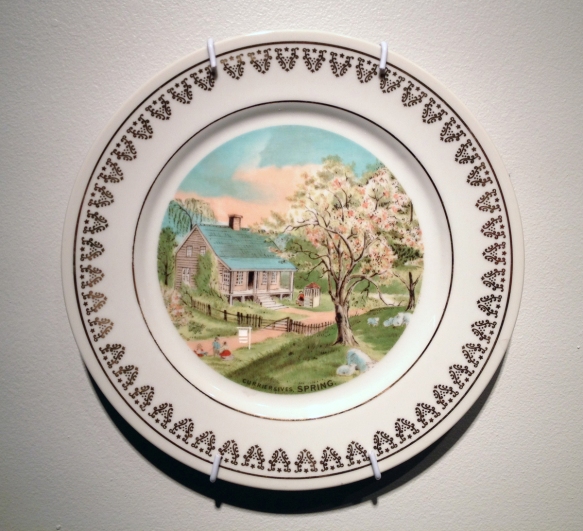 In 3 Season Home I’ve erased “for sale” signs into the yards of a Currier & Ives collection that celebrates American homes through the seasons.  I see this act as an intervention that points to a changing ways we envision the permanence of house and home.

To see more detailed images from this series please visit my website.

On Thursday, October 11th I drove down to Memphis for the opening of my most recent show at the Wrong Again Gallery run by Greely Myatt.  The exhibition is called, Behind Closed Doors: An Evening of Rockwellian Taboo.  It runs from Saturday, October 13th thru Halloween.

Behind Closed Doors at the Wrong Again Gallery (gallery is closed) 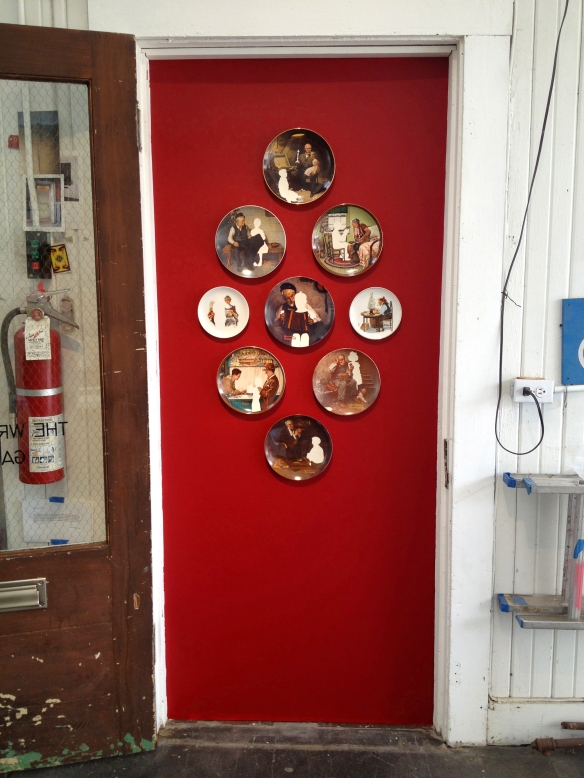 Behind Closed Doors at the Wrong Again Gallery (gallery is open) 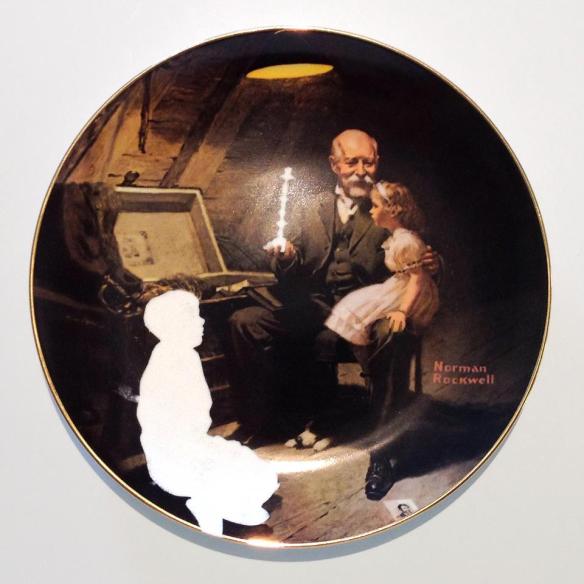 I removed the figures on this series of plates to bring a renewed focus to the content of the imagery on them, specifically the relationship between adult and child. This intervention highlights the expressions on the adults faces in Rockwell’s work, drawing attention to a cultural shift in normative displays of parental behavior over the past 60 years.

I see the erasure as an agent that directly challenges the age old adage of “being seen and not heard,” a practice that leaves little room for any agency at all. The white silhouettes combined with the remaining imagery for me, reveal uncannily dark narrative undertones, which I believe are representative of Rockwell’s personal struggles with family, intimacy and isolation.